Five workers and a site engineer were killed and over 15 injured in a metro bridge collapse in Dehli on Sunday. 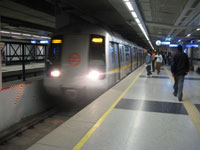 The condition of two of the injured was described as critical. This is the second tragedy that had struck the railway in eight months, Hindu reports.

The accident occurred on a particularly tricky section, where metal cantilever was being raised to lift a 300-ton prefabricated concrete segment of the bridge.

It all tumbled down in a V-shaped pile, crushing workers underneath. Metro spokesman Anuj Dayal said it appears cracks had developed on a pillar cap, which caused a section of the bridge to be displaced.

In addition, New Delhi Chief Minister Sheila Dikshit said the government will appoint an expert panel from universities and technology institutions to find the accident's cause, The Associated Press reports.

Meanwhile Architect Sudhir Vohra, who visited the site, soon after the incident was categorical about negligence. "At first glance and from the photographs I have taken, this is a structural design blunder. Those columns are cantilevers and are meant to take heavy dynamic loads. There have obviously been blunders during design and also during its verification. Most importantly, there should have been a third party design certification. This actually throws up a doubt on the structural strength of a lot of the other constructions being done by Delhi Metro. I hope Delhi Metro does not now try to cover up the mistakes they have made,'' he said, The Times of India reports.