Man Gored to Death by Bull in Spain

A man was gored to death by a bull during the running of the bulls at the San Fermin festival in northern Spain, which attracts tourists from across the world, organisers said. 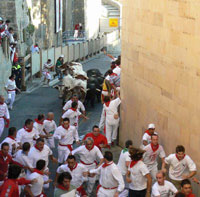 Man Gored to Death by Bull in Spain

A spokesman for the San Fermin organisers commented on this: "He is dead. He had been hit by a horn that punctured a lung," AFP reports.

Television showed a bull flipping a man dressed in white trousers and a green shirt and then goring him as he lay curled on the ground while fellow runners tried to distract the animal by pulling on its tail and hitting it with sticks.

"I feared for my life. It was pretty intense," said 23-year-old runner Mark Kowalski of Edmonton, Alberta, WDSU reports.

This fatality is the first since 1995.

The San Fermin festival Web site says the unidentified man was gored in the neck and lung during a run Friday that was messy and dangerous because of a rogue bull that separated from the pack.

Hospital officials say three other people were also gored, and six others suffered bumps, bruises and other lesser injuries, The Associated Press reports.