Pakistan will regain control of a restive tribal region bordering Afghanistan within "two to three months," a top general said during an assessment of a major offensive there against al-Qaida and Taliban militants. 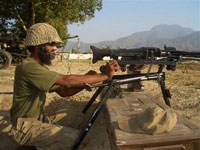 Maj. Gen. Tariq Khan told reporters on an army-organized trip to the northwestern Bajur region that troops had killed between 500 and 800 militants and wounded 2,000 others since the offensive began in early August.

As many as 5,000 militants were believed to be fighting there and still control key areas, said Khan of the paramilitary Frontier Corps.

Still, he predicted the military would retake Bajur "within two or three months."

The U.S. has praised the offensive in Bajur, which is part of a semiautonomous tribal belt where Osama bin Laden and other al-Qaida and Taliban militants are rumored to be hiding.

Military officials paraded 10 blindfolded and handcuffed men said to be Taliban fighters arrested during the operation before the reporters who joined the trip.

Pakistan's top military spokesman, Maj. Gen. Athar Abbas, told The Associated Press in a recent interview that the militants had established a virtual mini-state in Bajur as well as a "mega-sanctuary" for insurgents attacking foreign and government troops in Afghanistan.

He said militants control the main road leading into the tribal area, have converted schools into Islamic courts and have imposed taxes on timber and marble, the region's two main industries.

The Pakistani offensive has used ground forces backed by helicopter gunships and other air support. A suspension was announced at the end of August in honor of the Muslim holy month of Ramadan, but within days the fighting resumed.

The militants are led by 10 commanders stationed in various parts of the tribal region, Khan said. Faqir Mohammed, a top Pakistani Taliban leader, is among those coordinating attacks and is believed to have been injured, Khan said.

Abbas said Afghan militants, led by a commander named Ziaur Rehman, have joined the fight. He added that the operation has so far produced no trace of bin Laden or al-Qaida No. 2 Ayman al-Zawahri.