A gunman opened fire Tuesday on students at a vocational school for adults in western Finland and then shot himself, police said. Finnish media reported that several people were killed. 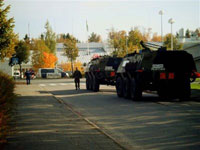 The shootings began just before 11 a.m. (0800 GMT) as about 150 students went to class in Kauhajoki, 180 miles (300 kilometers) northwest of Helsinki. Witnesses said panic broke out as a hooded gunman entered the school and opened fire.

"Within a short space of time I heard several dozen rounds of shots, in other words it was an automatic pistol," school janitor Jukka Forsberg told broadcaster YLE. "I saw some female students who were wailing and moaning, and one managed to escape out of the back door."

Finnish broadcaster YLE, citing police at the school, reported that several people were killed. The Finnish news agency STT said the school building was on fire and the gunman reportedly had explosives on him.

Jussi Muotio, superintendent of the Kauhajoki police, confirmed that several people had been wounded but could not immediately confirm the deaths.

"The incident is over now," Muotio said.

Vesa Nyrhinen, detective superintendent from the local police, declined to say how seriously the gunman was injured. "He was wounded by his own bullets," he said.

College rector Timo Varmola told YLE there were 150 students in the school at the time.

The shootings occurred almost a year after another gunman killed eight people and himself at a school in southern Finland, an attack that triggered a fierce debate about gun laws in this Nordic nation with deep-rooted traditions of hunting in the sub-Arctic wilderness.

With 1.6 million firearms in private hands, Finland is an anomaly in Europe, lagging behind only the United States and Yemen in civilian gun ownership, studies show.

Finnish media said YouTube clips of a man firing a gun appeared to be linked to the shooting. In one of them, a young man wearing a leather jacket fires several shots in rapid succession with a handgun at what appears to be a shooting range.

The posting was made five days before the shooting and the location was given as Kauhajoki. The posting included a message saying: "Whole life is war and whole life is pain. And you will fight alone in your personal war."

The person who posted the clip identified himself as a 22-year-old with the name "Mr. Saari." He also posted three other clips of himself firing a handgun in the past three weeks.

Clips from the 1999 Columbine school shootings in Colorado were listed among his favorite videos.

Police could not immediately confirm whether the postings were linked to Tuesday's shooting.

Last year, Pekka-Eric Auvinen, described by police as a bullied 18-year-old outcast, opened fire at his high school in southern Finland on Nov. 7. He killed six students, a school nurse and the principal before ending his own life with a gunshot to the head.

Finnish investigators have said Auvinen left a suicide note for his family and foreshadowed his attack in YouTube postings.

After Auvinen's rampage, the government said it would raise the minimum age for buying guns from 15 to 18, but insisted there was no need for sweeping changes to Finland's gun laws.