Gunshots fired at a motorcade for Pakistan's prime minister struck his vehicle Wednesday, but he was not in any of the cars during the apparent assassination attempt, a top government official said. 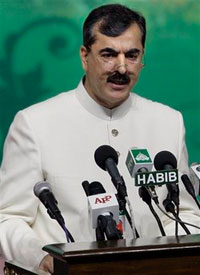 At least two bullets hit the front window on the driver's side of Yousuf Raza Gilani's limousine on the main highway linking Islamabad with the nearby city of Rawalpindi, officials said.

Interior Secretary Kamal Shah said later Wednesday, however, that the vehicles were attacked on their way to the airport to pick up the prime minister, who had been in Lahore, and that Gilani's plane had not even landed yet.

"The driver reached Islamabad airport, but the prime minister or his staff was not traveling in the vehicles," Shah said.

The incident nonetheless adds to tension in Pakistan at a time when its new civilian government - under pressure from American officials - is cracking down on Islamist militants after ousting U.S. ally Pervez Musharraf from the presidency. Taliban militants have claimed responsibility for a string of suicide attacks in retaliation for military offensives.

Television footage showed Gilani's black Mercedes parked at his office in the capital with two impact points clearly visible on the driver's window. The glass was cracked but intact.

Information Minister Sherry Rehman also confirmed that Gilani had not been in the motorcade and was safely back in Islamabad.

The attack was the second apparent assassination attempt in Pakistan in quick succession.

Shots were fired last week at a car carrying Lynne Tracy, the top U.S. diplomat in Pakistan's troubled northwest, as she was headed to her office in the city of Peshawar. No one was hurt in that shooting.

On Wednesday afternoon, plainclothes police with a sniffer dog searched for clues on a small hill from which they believed the shots were fired at the premier's car. They gathered snack wrappers and juice cartons and took them away from beneath a huge portrait of Pakistan's founding father, Muhammad Ali Jinnah, which greets travelers arriving in the capital.

The road was temporarily blocked, with traffic jammed in both directions.

Four workers for a company that is involved in a construction project on the road said they heard no shots and were not aware anything had happened until police arrived.

"We were working here, and the police came and questioned us," said Mohammad Zada.

Another worker, Shah Zeb, said he had been making his afternoon prayers when the incident occurred, and when he returned, "Police grabbed me. They searched me."

Pakistan has a history of assassination attempts against its political leaders.

Musharraf, who was despised by militants for allying with Washington after the Sept. 11, 2001 attacks, escaped at least four attempts on his life. In December, former Prime Minister Benazir Bhutto died in a gun-and-bomb attack during an election rally two months after returning from exile.