Fierce rains lashed central Japan early Friday, leaving one woman dead and three others missing, inundating vast stretches of rural and residential areas, and prompting authorities to order more than 1 million people from their homes. One man was seriously injured. 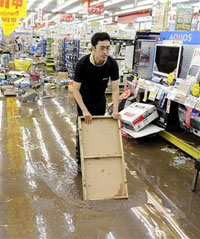 The rains abated by midday Friday, but authorities warned of heavy rains again in the region later in the day.

"While the evacuation order was lifted, we urged residents to be cautious as we expect heavy rains tonight," said Naoyuki Kato, a police official in the hardest-hit city of Okazaki, 140 miles (230 kilometers) southwest of Tokyo.

Earlier, authorities dispatched about 100 soldiers to Okazaki to rescue the stranded from flooded homes.

Hundreds of households were flooded, and some areas were left without power or telephone service hours after the storms. Several rivers overflowed, forcing drivers to abandon their cars in the streets.

Earlier Friday, rescuers in white hardhats negotiated gorged streets and canals in Okazaki in inflatable rafts, ferrying residents - many of them elderly - from ravaged homes to safety.

The overnight rains were unusually intense. At the storm's peak, Okazaki was soaked with 5.7 inches (14.6 centimeters) of rain per hour, according to Japan's Meteorological Agency, a record for the area.

A 76 year-old woman was founded drowned in her home in Okazaki and a man was in serious condition, local police official Kazumi Yamagawa said. Three others were missing in Okazaki, according to Kyodo. But Okazaki police only confirmed an 80-year-old woman was missing.

Hachioji, a western suburb of Tokyo, was also blasted with record rains, triggering landslides that destroyed several homes. Several train lines were affected and hundreds on their way to work in the city suffered delays.

Japan is often hit in summer by heavy rains, which can trigger flash flooding. Earlier this month, five workers were killed in Tokyo after being sucked down a manhole when sewage waters suddenly rose after a thunderstorm.

Last month, a woman, two girls and a boy were found dead after being washed away by a swollen river after a downpour in the port city of Kobe, about 270 miles (435 kilometers) west of Tokyo.