The hijackers of a plane that took off from Sudan's Darfur region released its passengers Wednesday after landing hours earlier at a remote desert airfield in southern Libya, a civil aviation official said. 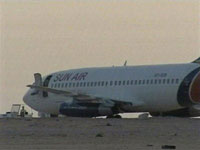 Crew members, however, were not being allowed off the plane, he said, speaking on condition of anonymity because he was not authorized to talk to reporters.

Hijackers commandeered the Boeing 737 jetliner, which was carrying 95 passengers and crew, soon after it took off Tuesday from the southern Darfur town of Nyala, not far from a refugee camp that the Sudanese military attacked on Monday. Sudanese forces and their militia allies have been battling rebels in the vast western region since 2003.

The plane, which had been en route to the Sudanese capital of Khartoum, was diverted to a World War II-era airstrip in Libya's Sahara desert oasis of Kufra.

Mohammed Shleibek, chief of Libya's civil aviation authority, told the official news agency, JANA, that negotiations between his agency and the hijackers resulted in the release of all passengers. Negotiators were trying to persuade the hijackers to surrender, he said.

JANA reported that there were 87 passengers and eight crew members.

Sudan's Foreign Ministry called the hijacking an "irresponsible terrorist act" and said they wanted the hijackers to be extradited.

Earlier Wednesday, Kufra airport director Khaled Sasiya spoke to one of the hijackers, who demanded maps to fly to Paris and fuel for the plane, JANA reported.

Sasiya said the man, who identified himself as Yassin, told him that he and his fellow hijackers were from the Darfur rebel Sudan Liberation Movement led by Abdulwahid Elnur, according to the news agency's report.

The rebel leader denied his group was involved.

"We categorically deny that the Sudan Liberation Movement has carried out the hijacking," Elnur said, speaking to Al-Jazeera television by telephone. "We condemn any act that causes harm to any Sudanese civilian."

Asked earlier if French authorities could accept the hijackers arriving in France, French Foreign Minister Bernard Kouchner told Europe-1 radio that he could "not say anything now. But we are considering everything so that the passengers, the 100 passengers, are protected."

Kouchner also said that rebel leader Elnur, who lives in Paris, denied he was in contact with the hijackers.

"He says he doesn't know these people and that he absolutely refuses to use such methods," Kouchner said. "It's not his way. He's rather a peaceful man."

The hijacked airliner belongs to a private company, Sun Air.

Among the passengers were former rebels who have become members of the Darfur Transitional Authority, an interim government body responsible for implementing a peace agreement reached in 2006 between the government and one of the rebel factions, a security official at Nyala airport said. He spoke on condition of anonymity because he was not authorized to talk to the press.

There was conflicting information about the hijackers' identities and how many there were.

A Libyan official at the Kufra airport said on Tuesday that there were 10 hijackers belonging to a Darfur rebel group. The official Sudanese news agency, SUNA, reported Wednesday that Sun Air put the number of the hijackers at four.

Sudan's consul in Kufra, Mohammed al-Bila Othman, told SUNA there were some 500 security and police personnel at the airport as well as ambulances and firefighting vehicles.

The chief of police of the southern Darfur province, Maj. Gen. Fathul-Rahamn Othman, told SUNA that the hijacking was meant to "destabilize security and is part of the events taking part in the Darfur provinces."

Darfur's ethnic African rebels have been battling the Arab-led Khartoum government since 2003 in a conflict that the U.N. says has killed up to 300,000 people and driven 2.5 million from their homes.

In the worst attack in months, the Sudanese military on Monday assaulted the Darfur refugee camp of Kalma, near Nyala airport, from where the hijacked plane took off.

A spokesman for Darfur's U.N.-African Union peacekeepers, Nourredine Mezni, said at least 33 people killed in the attack were buried Tuesday, though some U.N. officials said the toll could be higher.

A spokesman for one of the rebel groups, the Justice and Equality Movement, Ahmed Hussain, said he had reports of 70 dead. He accused the government in the hijacking, saying it was trying to "divert attention" from Monday's attack.