The Spanair plane that crashed last week in Madrid, killing 154 people, had landing gear trouble a month ago on a flight from Spain to Denmark and was forced to abandon a first attempt at takeoff, the company acknowledged Wednesday. 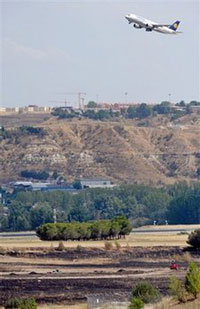 On July 26, the MD-82 was to take 167 passengers and crew from Palma on the Mediterranean island of Mallorca to Copenhagen.

But as it taxied to the runway the pilot heard a "louder than usual noise" coming from the front landing gear and returned to the gate, a Spanair official said.

Mechanics worked on the problem for about half an hour, and after taking on more fuel to make up for the fuel burned during the repair work, the plane took off without incident, 44 minutes late, the Spanair official said.

The official spoke on condition of anonymity because company rules bar her name from being published.

The incident was first reported Tuesday by a Danish newspaper, Ekstra-Bladet, and carried Wednesday by Spanish papers.

Spanair did not make the incident public until these newspapers asked about it because the company did not deem the case serious enough to mention, the official said. She said she did not know the exact problem with the landing gear.

This particular plane passed 36 inspections this year, she said.

Only 18 people survived the Aug. 20 Spanair takeoff crash on a flight from Madrid to the Canary Islands.

The plane struggled to get airborne, hit the ground tail-first, skidded and bounced three times over more than a kilometer before disintegrating and burning, the head of the Spanish commission overseeing the investigation, Francisco Soto, said Tuesday night.

Soto said it was too early to establish the cause of the crash but a preliminary report should be out in a month.

In this case, too, the plane abandoned a first takeoff attempt while taxiing. Spanair has said this was because of a minor problem with an air temperature gauge near the cockpit. It rules out any link between this malfunction and Spain's worst air disaster in 25 years.