Germany urged Russia on Monday to halt military action in Georgia, arguing there was no justification for further attacks after Tbilisi declared a cease-fire. 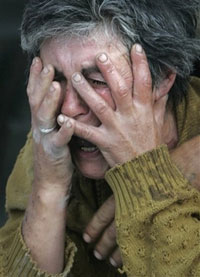 "We don't know whether it is being adhered to 100 percent, but it is time to say that there is no longer any justification for further military attacks," Gernot Erler, a deputy German foreign minister, said on ZDF television.

"We again call on the Russian side to stop them and accept the mediation efforts," Erler said. He said events had demonstrated the "clear military superiority of Russian forces."

Chancellor Angela Merkel welcomed the Georgian cease-fire pledge and said she advocated "establishing a mechanism to check objectively the withdrawal" of troops, spokesman Thomas Steg told reporters. That could involve the Organization for Security and Cooperation in Europe, he said.

The German government also said it would spend EUR 1 million (US$1.5 million) on humanitarian aid for the region.

German officials have made clear that Merkel will visit the Russian Black Sea resort of Sochi as planned on Friday to meet President Dmitry Medvedev.

Merkel "has the chance ... again to make our position clear" in those talks, Erler said.