Investigators were trying to determine Monday who was behind the deadliest attack against civilians in Turkey in nearly five years, a twin bombing that killed 17 people and injured more than 150 others in a crowded Istanbul square. 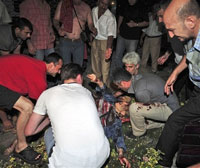 Istanbul Gov. Muammer Guler said the Sunday night blasts appeared to be linked to a Kurdish rebel group, but added the investigation was continuing. The rebels immediately denied involvement.

"There appears to be a link with the separatist organization. We are working on that. We hope to get a result at the first opportunity," Guler told reporters Monday.

However, the rebel Kurdistan Workers' Party, or PKK, rejected that claim.

"The Kurdish freedom movement has nothing to do with this event, this cannot be linked to the PKK," Kurdish rebel leader Zubeyir Aydar was quoted as saying by a pro-Kurdish news agency, Firat. "We extend our condolences to the families of the victims and to the Turkish people."

The bombs went off in the residential neighborhood of Gungoren in a busy square closed to traffic where people congregate at night, often bringing their children to eat ice-cream or sunflower seeds.

A newspaper said Turkish police had detained three teenagers in connection with the blasts, but Guler would not confirm that report.

Prime Minister Erdogan canceled a Cabinet meeting Monday in the capital, Ankara, to travel to Istanbul.

The attack came on the eve of deliberations by the Turkey's top court on whether to ban the ruling party for allegedly trying to steer the country toward Islamic rule. There was no evidence of a link, and no claim of responsibility. Turkey is home to a variety of militants, including Kurdish rebels, Islamic extremists and alleged coup plotters with ties to the secular establishment.

Opposition leader Deniz Baykal said security officials told him the type of bombs used were similar to those used in attacks in Ankara and the mostly Kurdish city of Diyarbakir that were blamed on the PKK.

"I feel deep grief from this cowardly attack that targeted innocent citizens and I curse them with hatred," said Gen. Yasar Buyukanit, the military chief.

The high level of professionalism in the Istanbul bombings, apparently designed to inflict maximum casualties among civilians, was unsettling. Authorities said the vast majority of the deaths and injuries occurred when a curious crowd gathered after an initial, small blast.

The Cihan news agency said the second bomb consisted of the same plastic explosive used in a May 2007 suicide attack in Ankara that killed 7 people.

Cihan said two of those killed Sunday were children. Anatolia news agency said one victim was a 12-year-old girl who rushed with her parents onto the balcony of their fourth floor apartment to see what was going on.

The bombings and the legal challenge to the government highlight a growing mood of uncertainty in Turkey, where an Islamic-oriented government that won a strong mandate in elections last year is locked in a power struggle with secular circles that have backing in the military and judiciary.

The case before the top court is pivotal in that conflict, which has distracted attention from key policies such as Turkey's troubled bid to join the European Union.

In another reflection of Turkey's rift, an Istanbul court plans to try 86 people, including former army officers, accused of plotting to provoke an armed uprising with the aim of bringing down Prime Minister Recep Tayyip Erdogan's government.

Turkey is also waging war against Kurdish rebels who carry out cross-border attacks from Iraq. On Sunday, Turkish warplanes bombed suspected positions of the PKK in northern Iraq. Also three people died in southeastern Turkey in a landmine blast that was blamed on the guerrillas, who seek autonomy for Turkey's Kurds.

On July 9, gunmen opened fire on police guarding the U.S. consulate in Istanbul, sparking a firefight that killed three officers and three gunmen. Authorities were investigating whether the gunmen were inspired by al-Qaida.