A powerful earthquake that sent boulders tumbling onto a national highway, injured more than 100 people across a wide swath of northern Japan, officials said Thursday. 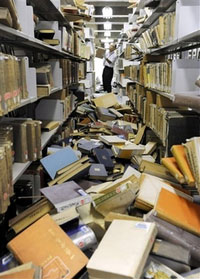 The quake, which had a preliminary magnitude of 6.8, came just one month after a 7.2 magnitude temblor killed at least 12 people in Japan's northern mountains.

Japan's Meteorological Agency said the earthquake struck shortly after midnight at a depth of about 65 miles (105 kilometers) near the coast of Iwate, which is 280 miles (450 kilometers) northeast of Tokyo, where shaking was also felt.

Most of the injuries were minor and none were life threatening, said a National Police Agency official on condition of anonymity, citing department policy.

The earthquake caused strong shaking for about 40 seconds in many areas of northern Japan, witnesses said. Life quickly returned to normal, however.

"Everything - including gas, phone lines, water, electricity - is running normally," said Takanori Hiyamizu, a city hall official in Hachinohe, one of the cities closest to the epicenter. "The damage from the quake was very minimal."

Japan's Kyodo News agency said 131 people were injured, citing its own tally. The National Police Agency said 109 people had been injured, including 16 seriously.

Police said some of the more serious injuries included a woman in Hirono who broke a leg falling down stairs and another woman in Aomori city who broke her hip fleeing out a window.

A 6.8 magnitude earthquake can cause severe damage, but Thursday's quake caused light damage because it hit in a sparsely populated region.

"Despite such a powerful earthquake, the damage was minimum because the epicenter was so deep," said Ryohei Morimoto, geologist and emeritus professor of geology at Tokyo University. "It was really lucky."

Several local nuclear power plants continued operations after they passed inspection, the Ministry of Economy, Trade and Industry said in a statement. The quake caused a blackout at more than 8,000 homes, it said.

Japan is one of the world's most earthquake-prone countries.

Retired US intelligence officer: Russia will win in Ukraine in summer of 2023