A shootout between police and robbers in a hotel and casino parking lot Monday killed three suspects and two workers who were caught in the crossfire, police and witnesses said. 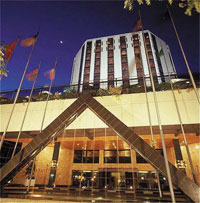 The firing started as officers chased suspects who were trying to rob the Mayfair Casino, which shares a parking lot with the Holiday Inn hotel in a residential area of the Kenyan capital, said Charles Owino, deputy police spokesman.

"We were very lucky there were not many guests around," said Paul Norman, general manager of Holiday Inn. He said the hotel's security service had immediately put up safety gates to prevent anyone from entering.

A witness, John Wanyonyi, said the two slain workers were employed by the casino.

The hotel and casino are in the residential Parklands area of Nairobi, near two shopping malls and upscale homes.

Violent crime has long been a problem in Nairobi, with Kenyan citizens by far the most frequent victims.

A surge of politically and ethnically motivated violence erupted after a disputed presidential election in December laid bare frustrations over poverty, corruption and long-standing ethnic rivalries in Kenya.

More than 1,300 people were killed and hundreds of thousands displaced during weeks of bloodshed.

Kenya lost up to $1 billion this year because of the turmoil, which damaged the country's vital tourism industry.