Two men were killed in woods in northern Bosnia when they stepped on a land mine left over from the 1992-95 war, police said in a statement Monday. 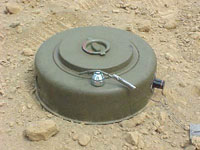 Ismet Tagic, 48, and Nihad Dagic, 24, were chopping wood on Sunday evening when Tagic stepped on a land mine that killed them both. Two other men were slightly injured from the blast in Turije, some 120 kilometers north of Sarajevo, police said.

A deadly legacy of the war in Bosnia, hundreds of thousands of land mines remain hidden throughout the country, one of the most heavily mined in the world.

After the fighting, documentation was collected on the location of some 350,000 mines, but NATO experts say that represents only one-third of the total number laid during the war.

Clearing the mines will take decades and cost millions of dollars the country doesn't have. Foreign donations are decreasing as donors turn toward new crises in other parts of the world.

According to the records of the International Committee of the Red Cross, land mines and other ordinance have injured over 1,500 people, more than 400 of them fatally, since the end of the war. A fifth of the victims were under 18.