Two commuter trains collided and derailed during the evening rush hour outside Boston, trapping and killing the operator of one train and injuring several passengers, authorities said. 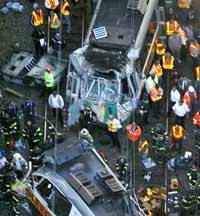 The crash came Wednesday just hours after an elevated train derailed in Chicago, sending several people to hospitals in a wreck that officials quickly blamed on operator error.

Investigators did not know what caused the Boston wreck, which killed a woman and injured about 10 passengers in an above-ground accident near a station in suburban Newton.

The operator's body was still trapped in the wreckage late Wednesday, said a firefighter at the scene who spoke anonymously because he was not authorized to do so publicly.

The two-car train she was operating slammed into the back of another two-car train approaching Woodland Station, said Joe Pesaturo, a spokesman for the Massachusetts Bay Transportation Authority.

"The first one was stopped at a red signal and was ready to proceed to the station when it was struck," he said.

The train operator's father, Terry Jones, identified her as 24-year-old Terrese Edmonds, The Boston Globe reported. Firefighters struggled to free her body from the tangled wreckage.

Federal investigators were on their way to the crash site, said Peter Knudson, a spokesman for the National Transportation Safety Board.

In Chicago, authorities said a train operator apparently made two key errors in quick succession to cause a derailment that left passengers perched more than 20 feet (6 meters) above the ground and sent several to hospitals.

The operator failed to heed a red signal ordering him to stop, Chicago Transit Authority spokeswoman Noelle Gaffney said. After the four-car train went through the signal, it automatically activated a trip switch, which stopped the train.

But the operator moved the train forward again at a spot where the tracks split before they were switched into proper position, causing the rear end of the front car and the second car to derail but remain standing, with the other two cars still on the tracks, Gaffney said.

"He was going on the wrong tracks, or started to," Gaffney said.

She said there was still a possibility the aging transit system played a role in the derailment, which sent 14 people to the hospital, none with life-threatening injuries.

Investigators were interviewing the operator, who has 31 years' experience, and he was cooperating, Gaffney said. He will undergo drug testing and not be allowed to return to work until the investigation is done.

Fourteen people wre taken to hospitals. Eleven were considered in good condition and three were in fair condition, said Fire Commissioner Raymond Orozco. A total of 25 people were on the train, including one CTA employee.

Some of the injured were put in ladder baskets and lowered to the ground, where they were put in ambulances. Others were led off the tracks via a nearby stairwell, officials said.