Chinese President Hu Jintao said rescue efforts from this week's powerful earthquake entered their "most crucial" phase Friday, as the country braced for a death toll expected to rise above 50,000. 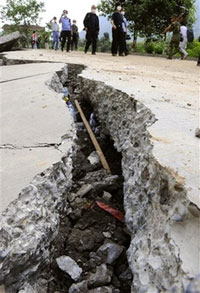 Hu flew into the disaster area in central China to view the devastation and massive relief operation that included more than 130,000 troops. Four days after the quake hit, Chinese soldiers and police also finally reached all of the isolated mountain counties and townships at the epicenter that had been most damaged, state media said.

Public criticism grew over the many children among the official death toll of 19,509, who were in class Monday afternoon during the magnitude 7.9 quake.

Education and housing officials took the rare move of taking questions online from angry Chinese citizens. The government said it would investigate why so many school buildings collapsed - destroying about 6,900 classrooms, not including the hardest-hit counties - and severely punish anyone responsible for shoddy construction.

But even a day past what experts say is the critical three-day window for finding buried earthquake survivors alive, rescuers pulled a student trapped for 80 hours from a school in Beichuan area and said they could hear weak cries for help from more.

The Earthquake and Disaster Relief Headquarters of the State Council, the country's Cabinet, has said total deaths could rise above 50,000. Tens of thousands could still be buried in collapsed buildings in Sichuan province, where the quake was centered, the province's vice governor told reporters.

"The challenge is still severe, the task is still arduous and the time is pressing," Hu was quoted as saying by the official Xinhua News Agency. "Quake relief work has entered into the most crucial phase. We must make every effort, race against time and overcome all difficulties to achieve the final victory of the relief efforts."

In Mianzhu, close to where Hu arrived, seven fallen schools buried 1,700 people, Xinhua said, and about 1,300 bodies had been recovered so far.

Weak signs of life were detected in five places amid the rubble of Dongqi Middle School in Mianzhu, Xinhua reported, and troops were continuing rescue work at the school where 100 students were missing.

In the same area, 700 students were thought to have been buried in a school in Hanwang town. Further north in Beichuan, 360 students were rescued from the ruins of a school, but another 700 were still buried.

Dozens of ordinary people were also trudging up the winding mountain road, carrying backpacks and bags of food and medical supplies, on a quest to find missing relatives.

Liu Jingyong, a 43-year-old migrant worker searching for his cousin, had traveled two days by bus and now foot just to get near his relative's home.

"I have not had any information from him," Liu said. "This is so hard on me."

Given the extend of destruction of roads, schools, homes, businesses and other infrastructure, AIR Worldwide, a catastrophe risk modeling firm, said it estimated that losses to both insured and uninsured property would likely exceed US$20 billion (EUR 13 billion).

The first international relief workers started working in the disaster zone, with a rescue crew from Japan arriving early Friday. China had initially been reluctant to accept foreign offers of help, but the Foreign Ministry said in a statement early Friday that specialist teams from Russia, South Korea, and Singapore were also welcome.

Experts said the time for rescues was growing short.

"Anyone buried in an earthquake can survive without water and food for three days," said Gu Linsheng, a researcher with Tsinghua University's Emergency Management Research Center. "After that, it's usually a miracle for anyone to survive."

He said there had not been an outbreak of any earthquake-related epidemics.

The Health Ministry posted a notice on its Web site for disease prevention, saying that saving lives was the top priority for now and then "public sanitation and epidemic control and prevention should be thoroughly carried out." Bodies should be cleaned and buried as soon as possible, the ministry advised.