By Anastasia Tomazhenkova: A dreadful explosion rocked an oil refinery in Texas. A violent blast shook buildings kilometers away Monday morning. At least one person injured. 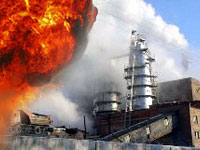 Howard County dispatcher claimed "All I know is that it blew up".

The 8:30 a.m. blast sent black smoke billowing into the sky and shut down a major interstate.

The refinery, owned by Dallas-based Alon USA, employs about 170 people and produces about 70,000 barrels a day. Company spokesman Blake Lewis claimed that he did not know how many people might be at the plant at the time.

Lewis remarked that the company had an unconfirmed report of an incident but did not know any details. He said a plant manager was on the way to the plant.

Big Spring police spokesman Roger Sweatt said there was a "major event" at the plant but that his department did not know anything about injuries. He said Interstate 20 was shut down near the plant.

"There's some fire and a whole bunch of smoke," Sweatt said.

The blast terrified residents of the town, about 450 kilometers west of Dalls.

"Our walls shook. It jolted your bed. It was like an earthquake." said Laura McEwen, the wife of Mayor Russ McEwen who lives about three kilometers from the refinery.