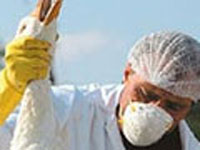 Separately, the government said the virus had returned to the Mekong delta in the south killing hundreds of ducks and chickens this month.

The H5N1 virus was found in samples taken from the child who died in a Hanoi hospital from high fever and serious pneumonia, the Voice of Vietnam radio quoted a ministry statement as saying, Reuters reports.

The global spread of (highly pathogenic) H5N1 in birds is considered a significant pandemic threat.

While prior H5N1 strains have been known, they were significantly different from the current H5N1 strain on a genetic level, making the global spread of this new strain unprecedented. The current H5N1 strain is a fast-mutating highly pathogenic avian influenza virus (HPAI) found in multiple bird species. It is both epizootic (an epidemic in non-humans) and panzootic (a disease affecting animals of many species especially over a wide area). Unless otherwise indicated, "H5N1" in this article refers to the recent highly pathogenic strain of H5N1.

In the first two months of 2006H5N1 spread to Africa and Europe in wild bird populations possibly signaling the beginning of H5N1 being endemic in wild migratory bird populations on multiple continents for decades, permanently changing the way poultry are farmed. In addition, the spread of highly pathogenic H5N1 to wild birds, birds in zoos and even sometimes to mammals (example: pet cats) raises many unanswered questions concerning best practices for threat mitigation, trying to balance reducing risks of human and nonhuman deaths from the current nonpandemic strain with reducing possible pandemic deaths by limiting its chances of mutating into a pandemic strain. Not using vaccines can result in the need to kill significant numbers of farm and zoo birds, while using vaccines can increase the chance of a pandemic.

Vietnam had its first major outbreak of deadly H5N1 in thirteen months on December 6, 2006 due to chickens not being vaccinated because they had been hatched illegally. "There is a real threat now of the disease spreading to other places since the farmers threw away the birds’ carcasses before the outbreak came to light."