A small chemical explosion occurred in the Fox News building. One worker was hurt. 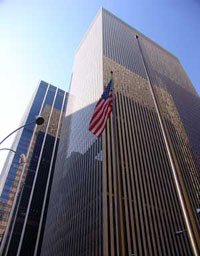 The explosion happened at 10:39 a.m. on the building's 45th floor, which houses the heating and cooling systems for the 47-story building, the AP reports.

The chemical was being routinely tested by a worker from the Department of Environmental Protection, a DEP spokeswoman said.

The chemical, used in heating and cooling systems, fell on the floor, mixed with another substance and caused a small explosion, firefighters said.

The worker was cut on the forehead as he tried to get out of the way; he was taken to a hospital for evaluation.

"We have some sort of reaction between two chemicals that caused a slight explosion," said fire spokesman Jim Long.

There are no offices on the floor, but three floors were evacuated.

The building is the headquarters for News Corp and houses Fox News and the New York Post, which were unaffected. Fox News is in the basement and continued broadcasting without interruption.