One of Lebanon's top military generals and at least two others were killed in a car bombing in a Christian suburb of Beirut, an attack further destabilizing a nation in a deep political crisis. 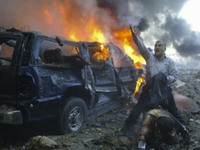 The target of the early morning attack, Brig. Gen. Francois Hajj, a top Maronite Catholic in the command, was considered a leading candidate to succeed the head of the military, Gen. Michel Suleiman, if Suleiman is elected president. Hajj, 55, also led a major military campaign against Islamic militants over the summer.

The blast was the first such attack against the Lebanese army, which has remained neutral in Lebanon's yearlong political crisis and is widely seen as the only force that can hold the country together amid the bitter infighting between parliament's rival factions.

The political divisions have paralyzed the government and prevented the election of a president, leaving the post empty since Nov. 23 in a dangerous power vacuum. Under Lebanon's sectarian division of political posts, the president must be a Maronite, like the army commander.

The slaying of Hajj and its timing raised immediate speculation over who was behind the bombing - some called it a warning to the military to stay out of politics, or a Syrian attempt to wreck the presidential election or revenge by Islamic militants for the army's fight against them.

Anti-Syrian politicians blamed Damascus, as they have for a string of bombings over the past two years that killed eight prominent opponents of Syria. Damascus has denied any role in those killings.

Telecommunications Minister Marwan Hamadeh, speaking to Associated Press Television News, accused the "Syrian-Iranian axis" of hitting the military, "the only body in Lebanon who can balance the power of Hezbollah and other militias in the country."

Syria denounced the attack, as it has past bombings. "We condemn this criminal act and every measure that jeopardizes Lebanon's security and stability," Foreign Minister Walid Moallem said. An unidentified Syrian official in the state news agency SANA blamed Israel for the killing.

"I can't tell you who is responsible, but we think it is essential for the Lebanese political system to be able to work its way through the current questions about who will be Lebanon's next president free from outside interference," he said.

He said Syria's denunciation of the bombing was "positive" but added, "while denunciations are useful, they need to be backed up by actions."

Syria's ally, the Shiite Muslim Hezbollah, which has good relations with the army, denounced the assassination. It called Hajj's death a "great national loss" and praised the military's "great national role" in preserving security.

The main Christian opposition leader, Michel Aoun, an ally of Hezbollah, told reporters that he had supported Hajj to succeed Suleiman as army commander. Aoun, a former head of the military, praised Hajj and said it was "shameful" for political forces to take advantage of the crime, a reference to the anti-Syrian groups.

France, Lebanon's former ruler which has been mediating the political crisis, and the European Union also denounced the attack.

Suspicion also fell on al-Qaida-inspired Sunni Muslim militants, whom the army crushed at the Palestinian refugee camp of Nahr el-Bared in northern Lebanon in an operation led by Hajj, a battle that cost hundreds of lives.

Hikmat Deeb, a leading member of Aoun's opposition Free Patriotic Movement, said Hajj was "a hero of Nahr el-Bared," suggesting the battle there was a factor in the assassination.

The military refrained from laying blame, saying in a statement that "the criminal hand" killed Hajj, along with "a number of soldiers, and wounded others." It said the military was investigating.

The blast went off at 7:10 a.m. (05:10 GMT) on a busy street near the Baabda Municipality building as school buses and people were setting off for work. Hajj, who lives in the area, had left his home few minutes earlier, probably heading to the nearby Defense Ministry, security officials said, speaking on condition of anonymity in accordance with military rules.

A parked car packed with 35 kilograms (77 pounds) of TNT exploded, apparently set off by remote control, as his SUV passed, wrecking his vehicle, setting several other nearby ablaze and knocking a crater two meters (yards) wide and a meter (yard) deep into the pavement.

Two bodies were thrown about 15 meters (yards) by the force of the blast, which also caused heavy damage in the wooded suburban hills, where the presidential palace and some foreign embassies are located. Troops sealed off the area as firefighters tried to put out the flames in at least two cars.

The security officials said three people were confirmed dead, including the general, his driver and bodyguard. Emergency workers were searching in nearby bushes for a possible fourth body.

Baabda is the historic capital of Mount Lebanon province, Lebanon's most populous province.

Saad Hariri, leader of the anti-Syrian parliamentary majority, said the attack came at a "pivotal time at which Lebanon's enemies are seeking to consecrate the vacuum in the presidency."

The failure to elect a president has embroiled Lebanon in its worst political crisis since the end of the 1975-90 civil war. The country has been without a president since Nov. 23 when Emile Lahoud left office and a deadlocked parliament failed to elect a successor.

Parliament is sharply divided between anti-Syrian supporters of the government of Prime Minister Fuad Saniora and the opposition, led by Hezbollah, an ally of Syria and Iran. The two sides are locked in a dispute over how to elect the army commander, Suleiman, as compromise candidate to fill the vacant presidency. His election requires a constitutional amendment because currently a sitting army commander is barred from the post.

The last major explosion on Sept. 19 killed anti-Syrian lawmaker Antoine Ghanem on a Beirut street, an attack blamed by his supporters in the government coalition on Syria. Syria denied involvement.

Wednesday's explosion occurred two years to the day to a bombing that killed prominent journalist Gebran Tueni in a car bombing his supporters had blamed on Syria. Lebanon has been rocked by a series of explosion since a massive truck bombing killed former Premier Rafik Hariri in central Beirut in 2005.