Bomb injures 16 soldiers going to military base in southern Thailand

Sixteen soldiers going to insurgency-wracked south were injured in an explosion that rocked in Thailand on Wednesday. 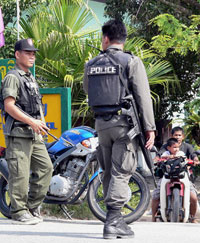 Bomb injures 16 soldiers going to military base in southern Thailand

The bus, taking the soldiers to a military base in Pattani province's Nong Chik district, was hit by a bomb placed in a fire extinguisher and buried in the road, said police Col. Wisit Aksornkaew.

Fourteen soldiers, the driver and a bus attendant were hurt, said a nurse at Pattani hospital, who spoke on condition of anonymity because she was not authorized to speak to the press.

More than 2,600 people have been killed in the southernmost Muslim-majority provinces of Pattani, Yala and Narathiwat, and some parts of neighboring Songkhla, since a long-simmering Islamic separatist insurgency flared up in January 2004.

Thailand's population is about 90 percent Buddhist, and many southern Muslims feel they are treated as second-class citizens.

Some 20,000 soldiers stationed in the area are often the target of bombings and ambushes. But civilians also are often victims, usually killed by drive-by shootings.