Some 26,000 people flee their homes as floods worsen in Malaysia

More than 26,000 people left their homes as heavy rains and overflowing rivers worsened the flood in eastern Malaysia. 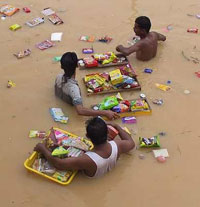 Some 26,000 people flee their homes as floods worsen in Malaysia

The centers reported that 26,092 people were sheltering Wednesday in town halls, schools and community centers on high ground.

Some of them were rescued by police boats after the floods cut off roads and highways.

Suriati Kamarul, a villager in Johor state, told local media that she was carrying her nine-month-old baby when the floodwaters rose to her shoulders.

"I prayed with about 10 neighbors and their children as we waited for help," the New Straits Times newspaper quoted her as saying. "Luckily police arrived in the nick of time in a boat."

The Meteorological Department said an "orange stage" warning was in effect for Johor and Pahang states, where moderate and occasionally heavy rain is expected to persist through Friday.

Malaysia increased flood mitigation efforts after suffering one of its worst periods of monsoon flooding last year. The government estimated costs of 1.2 billion ringgit (US$343 million; EUR 233 million) to repair roads and schools, and in aid to flood victims.