Gunmen attacked the office of Pakistani opposition leader Benazir Bhutto in the southwest of the country. Three opposition supporters were killed. 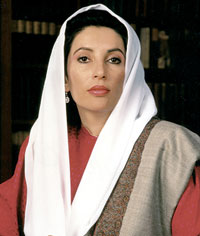 Officers were investigating the incident, which occurred in Naseerabad, about 250 kilometers (150 miles) east of Quetta, the capital of Baluchistan province, said Wajid Akbar, the district police chief. Police had no immediate information about the motive for the attack or who was behind it, he said.

Although killings and other violence have been common in past elections in Pakistan , the bloodshed in Naseerabad is the first such incident in the campaign for parliamentary elections scheduled for Jan. 8.

Pakistan has been engulfed in a political crisis since Nov. 3, when President Pervez Musharraf imposed emergency rule and fired Supreme Court justices who were preparing to rule on the validity of his October re-election.