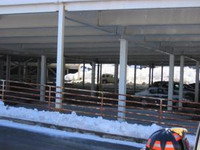 A female driver crashed into the edge of the top level of the parking deck at SouthPark Mall, Charlotte-Mecklenburg Police spokeswoman Julie Hill said.

A small portion of the three-tier deck then collapsed, and the driver's car fell through the opening, Hill said.

There were no other confirmed injuries, Hill said. Two cars under the collapsed concrete were destroyed, Charlotte Fire Department Capt. Rob Brisley said.

Officials are investigating the cause of the collapse.