A storm in the U.S. Pacific Northwest flooded dozens of houses and washed out roads. The region’s largest highway is covered with 10 feet (3 meters) of muddy water. 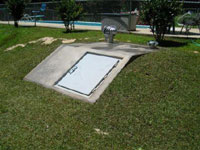 The storm, which killed at least five people, lashed the area with high winds and heavy rain, and forced authorities to evacuate a flooded Oregon town that was cut off by landslides. Tens of thousands of people were without power.

The same river left three miles (five kilometers) of Interstate 5 under water, closing the region's major north-south thoroughfare. Although rain eased overnight, runoff continued to feed the river, which crested at record highs, breaking a record from 1996, when flooding closed the freeway for four days.

State officials hoped to open the highway Thursday, but were waiting to see what damage the flooding might have done.

"We've got to be able to see if we have structural integrity in the highway," said David Dye, deputy secretary of transportation. "We've got lots of debris, garbage, tires, dead rats everywhere."

In Oregon , a mountain timber town called Vernonia was largely cut off by landslides, but National Guard trucks with high clearance were able to get in. Troops used inflatable rafts to evacuate flooded residents from the community of about 2,300 on the Nehalem River, about 35 miles (56 kilometers) northwest of Portland .

As the center of Vernonia filled with water, people moved to shelters and higher ground. The muddy water filled with sewage and debris.

The storm, the last of three severe weather systems to smack the region, moved into British Columbia on Tuesday and began to dissipate, the National Weather Service said. The earlier storms carried heavy snow to the Upper Plains, the Midwest and the Northeast.

Coast Guard crews continued to pluck stranded residents from flooded areas. A total of 131 people had been rescued as of Tuesday morning, with at least 40 of them hoisted by a Coast Guard helicopter, said spokeswoman Mandi Ruch in Seattle.

Many schools and government offices were closed for a second day. Mudslides also halted Amtrak passenger service between Portland and Vancouver , British Columbia .

Nearly 75,000 customers lost power in Washington , and more than 50,000 were still without power Tuesday morning, officials said. In Oregon, Portland-based Pacific Power said about 36,000 customers had no electricity.

There were three deaths in Washington . A man in Mason County died Monday night in a building hit by a mudslide, another died in Aberdeen when a tree fell on him, and the third died in Montesano when an electrical outage shut off the oxygen equipment he needed, officials said.

A 90-year-old woman in Oregon's Tillamook County died after suffering what a medical examiner called "a weather-related heart attack" as she evacuated. In that same coastal county, a truck was swept away by floodwaters, and the driver was reported dead.

Snow caused average delays of over an hour at Chicago's O'Hare Airport on Tuesday, and about 50 flights were canceled there. Flights at Midway Airport were delayed between 40 minutes and an hour, but there were no cancellations reported.