A Canadian cruise ship struck ice off Antarctica, but all 154 passengers and crew were rescued safely. 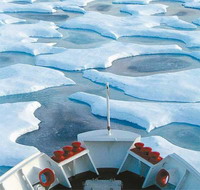 The passengers and crew from the Explorer were picked up by the Nordnorge, a Norwegian cruise ship that was nearby and responded to the distress call, said Susan Hayes of G.A.P. Adventures of Toronto, which owns the stricken vessel.

The 91 passengers included at least 23 Britons, 17 Dutch, 13 Americans and 10 Canadians, officials said. In addition to the passengers, there were nine expedition staff members and a crew of 54, Hayes said.

"The ship ran into some ice. It was submerged ice and the result was a hole about the size of a fist in the side of the hull so it began taking on water ... but quite slowly," she said. "The passengers are absolutely fine. They're all accounted for, no injuries whatsoever."

Hauyes said passengers abandoned ship in a calm and orderly manner as crew used pumps against the water entering the hull.

Still, Hayes said the evacuated ship is in danger of sinking.

"It is listing. ... There is a possibility we may lose the ship," she said.

The British and Argentine coast guards were notified before dawn Friday that the 2,646-ton Explorer was in distress off the South Shetland Islands and Graham Land, an Antarctic peninsula, taking on water through the hull despite efforts to use onboard pumps, Capt. Juan Pablo Panichini said.

A navy statement said the captain ordered passengers to abandon ship about 90 minutes after the first call and that they and the crew took to eight semi-rigid lifeboats and four life rafts, with the captain leaving the ship later.

The statement said Explorer was some 445 miles (715 kilometers) southeast of Ushuaia, the southernmost Argentine city and a jumping-off point for cruise ships and supply vessels for Antarctica.

Seas were calm and winds light at the time, what Panichini called "optimal conditions for carrying out the evacuation."

G.A.P Adventures is a tour company that provides excursions with an environmental focus. The Explorer was in the midst of a 19-day circuit of Antarctica and the Falkland Islands that allowed passengers to observe penguins, whales and other wildlife.

Chilean air force Commaner Raul Jorquera, at a Chilean air base on King George Island, said the Nordnorge arrived Friday afternoon in a bay close to the base but high waves and winds prevented passengers from immediately disembarking.

He said he expected the survivors to leave the ship later in the day and rest overnight before flying Saturday aboard Chilean air force planes to Punta Arenas at the southernmost tip of Chile, weather permitting.

Nordnorge Captain Arnvid Hansen, 54, told AP from the ship that he picked up passengers without any problems and they were resting below deck.