Tens of thousands of people are being evacuated from coastal villages and riversides Friday in the Philippines as a powerful typhoon headed toward an eastern region of the country. 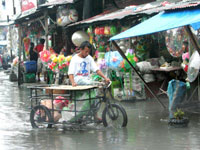 Typhoon Mitag slowed its speed toward land but became more powerful at midday Friday, packing 175 kilometer per hour (109 mile per hour) winds and gusts of 210 kph (131 mph) as it headed for the island province of Catanduanes in the Bicol region, where it was expected to slam ashore Saturday, chief government forecaster Nathaniel Cruz said.

Philippine disaster officials said over 194,000 people have fled or been evacuated to temporary shelters in Albay, Sorsogon, Camarines Sur, Camarines Norte and Catanduanes provinces on the southern tip of the main Philippine island of Luzon.

"There is a strong possibility of storm surges," Cruz said, noting that while still at sea, Mitag could intensify into a "super typhoon" with over 220 kph (138 mph) winds.

He said a powerful but slow-moving typhoon could wreak more havoc than one that passes over quickly.

"The end result is that more things will be blown down and destroyed," he said.

In Vietnam, officials prepared to evacuate 500,000 people as Typhoon Hagibis headed to the country after leaving 13 people dead in the Philippines this week.

Hagibis was packing 133 kph (83 mph) winds and was expected to make landfall on Vietnam's southern coast at the weekend.

In the South China Sea, 25 Filipino sailors were missing after a Philippine fishing boat capsized, a Chinese maritime official said Friday. Thirty other crew members were rescued and search teams were dispatched to look for those missing, said a man at the China Maritime Search and Rescue Center who gave only his surname, Zhang.

He has directed the mayor of one isolated town to distribute about 800 50-kilogram (110-pound) sacks of rice from a government warehouse in case food runs short while the town is inaccessible.

Several flights to the region from Manila were canceled.

In Manila, workers have started rolling up giant roadside tarpaulin billboards on steel frames to prevent them from being blown down by strong winds.

Philippine President Gloria Macapagal Arroyo, concerned about a repeat of last year's disaster in Bicol, ordered mass evacuations along the typhoon's expected path and cut short her visit to Singapore, where she was attending an Asian summit.

Cruz said after slamming into Catanduanes, the typhoon could veer slightly southwest and hit Albay province, which bore the brunt of last year's Typhoon Durian that triggered flash floods and unleashed tons of volcanic debris, killing more than 1,000 people.

Albay Gov. Joey Salceda has suspended classes so some schools can be used as shelters. The provincial government mobilized military and police trucks to transport residents to evacuation centers.

He said the "pre-emptive evacuation" would prevent more difficult rescue work at the height of the typhoon.

"The order of the president is zero casualty," he told DZRH radio Friday. "We are ordering the evacuation of the eastern seaboard. This is a huge population."

He said those who refuse to evacuate will be asked to sign a waiver.