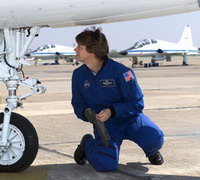 An air force jet crashed in western Turkey during training Thursday, killing one pilot and wounding another.

The T-38 A jet crashed within perimeters of an air base in the Aegean city of Izmir, private Dogan news agency reported. It was not clear if the accident happened during take off or landing.

One pilot survived the accident, according to NTV television.