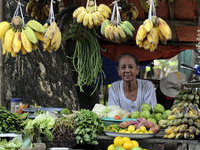 Pesticides, fungicides, growth regulators, and herbicides are destroying people instead of performing their direct function of controlling the process of plant growth, Pravda.Ru reports.

It just so happens that most people use many chemicals without knowing what their synergistic results are.

Insecticides, the most widely used of all types of pesticides invented to kill insects, but are likely killing beneficial creatures likes bees and butterflies.

Fungicides meant to protect seeds against fungi living in soils.

Bactericides that were supposed to control harmful bacteria but have given rise to super-bugs and antibiotic resistant bugs that don't respond to medicine.

Miticides to kill mites and ticks.

All these chemicals are pervasive in our environment.

Also read: Say no to pesticides

In a short video you can see what happens to people when they start an all organic diet. After watching the video, you will never want to eat conventional food again.