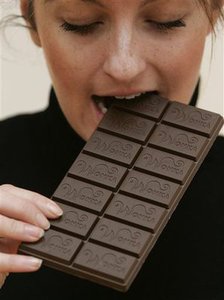 Yes, it's true: a new study from the British Medical Journal (BMJ) finds that eating a large amount of chocolate may lead to a 33% lower risk of developing heart disease.

Heart disease is the leading cause of death in the United States, accounting for over a quarter of all adult deaths, according to the Centers for Disease Control and Prevention (CDC). Doctors keep reminding us that much of it can be prevented with lifestyle changes, such as eating a more low- fat, high fiber and heart-healthy diet, quitting smoking and exercising more. So it's been welcome news that recent studies have linked one of our favorite fat-heavy foods--chocolate-- with improving heart health, informs TIME.

Dr Oscar Franco, from the University of Cambridge, carried out a large scale review of the existing evidence to see the effects of eating chocolate on heart attacks and strokes.

He analysed the results of seven studies, which had involved more than 100,000 people  with and without existing heart disease.

Differences in study design and quality were also taken into account to minimise bias.

Five studies reported a beneficial link between higher levels of chocolate consumption and the risk of cardiovascular events.

But despite the findings, the researchers said chocolates should be taken "with caution" and people should be careful which chocolate they chose to eat.

eaters at risk of diabetes and heart disease, they said.

The researchers will now look at whether other factors could explain the positive effects, says Zee News.