American Teens Get Pregnant Too Often

The U.S. teen pregnancy rate rose in 2006 for the first time in more than a decade, reversing a long slide, a U.S. think tank reported on Tuesday. 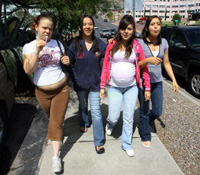 American Teens Get Pregnant Too Often

The United States has higher rates of teen pregnancy, birth and abortion than in other Western industrialized countries.

In 2006, 7 percent of all teenage girls got pregnant, according to the report.

Fewer black teenage girls got pregnant, closing a gap with Hispanic teens. But rates among both groups were still significantly higher than for white teens, the report said, and rates went up for all ethnic groups.

"We're not quite sure yet whether this is just a blip or whether it's the beginning of a longer upward trend," Larry Finer, Guttmacher's director for domestic research, said in a telephone interview.

"It's interesting to note that this flattening out of the rate and the increase in the rate is happening at the same time that we've seen substantial increases in funding for abstinence-only programs," Finer said.

"We do know that when we saw the big decline in the '90s, that a lot of that decline was due to improved contraceptive use among teens."

The abstinence-only programs, backed by many social conservatives who oppose the teaching of contraception methods to teenagers in U.S. schools, received about $1.3 billion in federal funds since the late 1990s.

The Obama administration's 2010 budget eliminated spending for abstinence-only, shifting funds to pregnancy prevention education that include abstinence along with "medically accurate and age-appropriate" information.