Cancer from Tanning Beds Is a Real Menace for Young Skin

Bad news for tanning beds fans  -  the Food and Drug Administration will be debating how to toughen warnings that those sunlamps pose a cancer risk. Yes, sunburns are particularly dangerous. 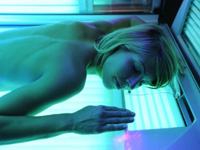 Cancer from Tanning Beds Is a Real Menace for Young Skin

This is a message that Katie Donnar, 18, dismissed until a year ago when, preparing for the Miss Indiana pageant, she discovered a growth on her leg - an early-stage melanoma, the most dangerous form of skin cancer.

She can't prove tanning beds are to blame, but started using them as a sixth-grade cheerleader, says she stepped under the bulbs about every other day during parts of high school, and at one point even owned one.

"It seemed somewhat of a myth that I was putting myself at risk," says Donnar, of Bruceville, Ind., who found the melanoma before it spread.

"The warning label was so small, nothing to make me stop and think, 'This is real,' " she said of the tanning bed.

The World Health Organization's cancer division last summer listed tanning beds as definitive cancer-causers, right alongside the ultraviolet radiation that both they and the sun emit. They'd long been considered "probable" carcinogens, but what tipped the scales: An analysis of numerous studies that concluded the risk of melanoma jumps by 75 percent in people who used tanning beds in their teens and 20s.

Next comes the U.S. Food and Drug Administration, which has long regulated tanning beds as "Class I devices," a category of low-risk medical devices that includes bandages. Tanning beds do bear some warnings about the cancer link, but the FDA recently decided those labels aren't visible enough to consumers and don't fully convey the risk, especially to young people.

So in March, the FDA's scientific advisers open a public hearing to explore stricter tanning bed regulation, both stiffer warnings and reclassifying them to allow other steps.

The Indoor Tanning Association, already fighting pending legislation that would tax tanning salons to help pay for Congress' health care overhaul, argues there's no new science to justify increased FDA regulation. Any risk is to people who overdo it, says ITA President Dan Humiston, arguing that's easier to do in the sun.

But the FDA also says some people go too often, using tanning beds three times a week, for example, when its research shows once a week would provide visually the same tan.

Fair-skinned people who don't tan easily are at highest risk. Melanoma is particularly linked to sunburns at a young age, and while it usually strikes in the 40s and 50s, doctors are seeing ever-younger cases like Donnar.

A good tan provides the equivalent of a sunscreen rated just SPF-4, but even good tanners can get melanoma.

So be out in the early morning and late afternoon, when those UV rays penetrate less, and use sunscreen. In Indiana, that's Donnar's new lifestyle, plus some spray-on tanners for pageants.

"My friends call me 'snow princess' now but I feel comfortable in my own skin."