The More Coffee Breaks the Better

Drinking a lot of coffee or tea has been linked to a lower risk of developing type 2 diabetes in a new analysis. 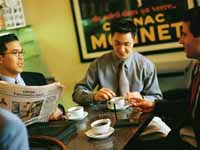 The More Coffee Breaks the Better

Researchers led by Rachel Huxley of The University of Sydney pooled 18 studies conducted since 1966, which followed more than 500,000 people, of whom 21,000 developed diabetes. Taken together, the papers showed that people who had three to four cups of coffee a day had a 25 % lower risk of diabetes compared with people who had one, two, or no cups of coffee. The risk of diabetes fell by 7 % for each additional cup consumed. A similar association was found for decaffeinated coffee and tea.

The relationship held true even after accounting for any differences in such variables as body mass index, smoking, and, in some of the studies, socioeconomic status and total calories.

Most of the studies also took into account whether coffee or tea drinkers were consuming less of other beverages. “So it’s not that these people were consuming less Coke or other sugary drinks,’’ Huxley said. The authors raised the possibility that some undetermined chemical in coffee and tea might have a beneficial effect on glucose metabolism and insulin sensitivity involved in diabetes.

Boston Globe has contributed to the report.