U.S. scientists made funny discovery which may help men  to treat premature ejaculation -  spray works as  a drug. 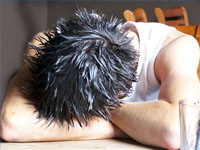 Trial volunteers who used the anaesthetic spray lasted five times longer in the act of love than they did when given a dummy treatment.

The spray, known as PSD502, consists of a combination of two sensation-numbing drugs.

Results of a study involving 256 men suffering from premature ejaculation (PE) in the US, Canada and Poland were presented in California.

It showed that administering the treatment five minutes before intercourse delayed ejaculation up to five-fold. The men also reported improved levels of control and sexual satisfaction and reduced stress.

Lead researcher Professor Stanley Althof, from the Centre for Marital and Sexual Health of South Florida in West Palm Beach, US, said: "Premature ejaculation can have a powerful negative impact on the emotional and sexual lives of men and their partners.

"Recently, the international sexual health community agreed that PE should be defined as ejaculation occurring within approximately one minute of penetration that causes the patient distress. Now we need to work to develop treatments, and these encouraging results with PSD502 seem to be a step in the right direction."

An estimated one third of US men aged 18 to 59 are affected by premature ejaculation, making it twice as common as erectile dysfunction, according to the Associated Press' report.