Vitamin D is Almost Panacea for Many

A new study suggests maintaining high levels of vitamin D in the blood help reduce risk of stroke, heart disease and death significantly even in healthy people who never have heart disease. 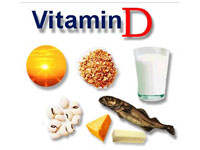 Vitamin D is Almost Panacea for Many

The study was conducted by researchers at the Heart Institute at Intermountain Medical Center in Salt Lake City and will be presented at the American Heart Association's Scientific Conference on Monday, Nov. 16 in Orlando, Florida.

For the study, the researchers followed 27,686 patients aged 50 or older with no prior diagnosed cardiovascular disease. Vitamin D was tested during routine clinical care. And then the patients were divided into three groups depending upon their levels of vitamin D, normal (greater than 30 ng/mL, low (15 to 30 ng/mL and very low (less than 15 ng/mL). Then they were followed to see if they developed any heart disease.

Vitamin D is involved in the body's regulation of calcium and its deficiency is associated with musculoskeletal disorders among other things. Recent studies have linked many types of diseases including heart disease, diabetes and cancer to vitamin d deficiency.

"We concluded that among patients 50 years of age or older, even a moderate deficiency of Vitamin D levels was associated with developing coronary artery disease, heart failure, stroke, and death," said Heidi May, PhD, MS, an epidemiologist at the Institute and coauthor of the current study.

"This is important because Vitamin D deficiency is easily treated. If increasing levels of Vitamin D can decrease some risk associated with these cardiovascular diseases, it could have a significant public health impact."

Heart disease is the number one killer in the United States. A small reduction of the risk could save many people's lives. An estimated 16,800,000 Americans suffered coronary heart disease, 6,500,000 strokes and 5,700,000 heart failures in 2006 alone. Cardiovascular disease killed 864,480 Americans in 2005, according to American Heart Association.

Food Consumer  has contributed to the report.