The dollar slipped against the euro on Friday after the U.S. Federal Reserve cut its discount rate to banks by a half percentage point. 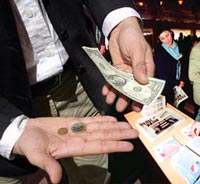 The Fed approved the cut in the discount rates in its most dramatic effort yet to restore calm to global financial markets roiled by a widening credit crisis.

The decision means that the discount rate, the interest rate that the Fed charges to make direct loans to banks will be lowered to 5.75 percent, down from 6.25 percent. However, the Fed did not change its target for the more important federal funds rate, which has remained at 5.25 percent for more than a year.

By contrast, the European Central Bank and Bank of England have been raising their rates. The ECB is expected to make another increase in September.

Higher interest rates, a weapon against inflation, can support a currency by offering investors better returns on investments denominated in it.