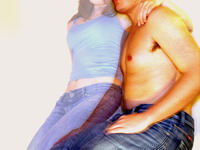 Although Levi's has been family owned since 1985, the company still discloses its financial results because its debt is publicly traded.

For most of the past decade, Levi's quarterly reports have been gloomy accounts marked by eroding sales and crumbling profits that reflected the declining popularity of its jeans and other clothes.

But the story has been changing during the last two years as the company benefited from years of cost-cutting and a modest upturn in its sales.

This marks Levi's seventh consecutive quarter of rising profits. The company is now on pace for its best year since its financial funk that has seen its annual sales fall in nine of the last 10 years. The only exception occurred in 2005 when Levi's edged up by just 1 percent.

Hans Ploos van Amstel, Levi's chief financial officer, predicted the upturn will continue during the final half of the year.