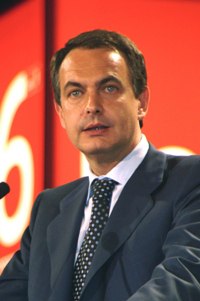 "I place no political price ahead of ending terrorism and violence, but ETA has made negotiating impossible," Jose Luis Rodriguez Zapatero said.

The bomb also ended ETA's so-called "permanent ceasefire", ruptured any attempts at negotiations and made Zapatero look out of touch ahead of local and regional elections across Spain in May, which many observers viewed as a rehearsal for general elections due to be held by March 2008.

Zapatero took full responsibility for the failed negotiations and told parliament he was aware of "the risks and the opportunities" in trying to talk with ETA.

ETA, on the other hand, blamed the government for a failed peace process and announced last month that it was once again becoming "active on all fronts." This was interpreted as signaling an imminent resumption of attacks, but so far there have not been any.

In recent weeks the armed group has shown renewed signs of activity.

On June 21 police found a car loaded with 100 kilos (220 pounds) of explosives in southwestern Spain near the Portuguese border.

ETA, whose name stands for Basque Homeland and Freedom, has been waging a violent campaign since the late 1960s for an independent Basque state.

At the national debate, which is to conclude on Wednesday, Zapatero also spoke of the strong state of the Spanish economy and the consequences of international terrorism.

Zapatero, a Socialist, came to power in March 2004 after the Madrid train bombings by suspected Islamic militants.