Jim Press, the top man of Toyota's North American operations, got the go-ahead from shareholders Friday to become the first non-Japanese member of the automaker's board of directors. 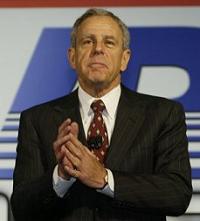 Press, 60, a 37-year veteran at Toyota Motor Corp., was appointed to the board in April, the latest step in Toyota's efforts to bolster its standing as an international company.

Shareholders approved the move Friday in Toyota city, where the automaker is based, at a nearly two-hour meeting attended by more than 2,500 people, the company said.

The approval comes as Toyota is boosting sales in North America and grabbing market share away from Detroit automakers. But that success has aroused concern at Toyota of a political backlash in the United States. Lawmakers from manufacturing states have charged the Japanese government has kept the yen artificially low, giving Japanese automakers an advantage.

"It's part of Toyota's efforts to become a Japanese company that has roots in America," he said. "It's also a recognition of Mr. Press' achievements, especially the fact that he has truly become a Toyota man."

Former Toyota Chief Executive Hiroshi Okuda said earlier this year that Toyota needs to open up its board to non-Japanese and boost foreign ownership of company shares from about 20 percent today to win greater acceptance as a global company.

More broadly speaking, Press' appointment points to the growing presence of foreigners in senior positions at Japanese companies, which for decades were wary of non-Japanese in high places in management.

In recent years, foreign chief executives have grown more common, including high-profile ones such as British-American Howard Stringer at Sony Corp. and Brazilian-born Carlos Ghosn at Nissan Motor Co.

Press, who makes no secret of his admiration for Toyota's Japanese cultural virtues as a key force of the automaker's strength, has been the most visible figure in the U.S. for the manufacturer of the Camry sedan, Prius hybrid and Lexus luxury models.

Press, who enjoys scuba diving and flying airplanes, joined the Toyota board as part of an expansion of the board from 25 to 30 members. He joined Toyota in 1970, after leaving Ford Motor Co.

Toyota, which beat General Motors Corp. in worldwide vehicle production and sales in the first quarter for the first time ever, saw its January-March profit rise 9 percent to 440.1 billion yen (US$3.5 billion; euro2.6 billion).

Analysts say it is just a matter of time before Toyota becomes the world's biggest automaker _ a title that technically depends on total annual vehicle production. Toyota officials repeatedly play down the prospect, saying that their goal is to satisfy customers and sell good cars, not become No. 1.