Consumer is anxious about whether gasoline prices will move higher that makes Americans worry about the economy's prospects and their own financial positions. 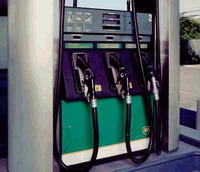 The RBC Cash Index found that confidence clocked in at 87.1 in May. The new figure hovered near April's reading of 85.4, a six-month low. The index is based on the results from the international polling firm Ipsos.

"Although employment is mostly stable, there are many uncertainties on the horizon," Yamarone said. "Will energy prices go even higher? How is the housing slump going to play out? It is the fear of the unknowns that is coloring peoples' feelings."

Those fears were a factor in the big drop in peoples' feelings about how the economy and their own finances will fare over the next six months. This expectations measure fell to 24.3, a nine-month low. In April, this gauge stood at 41.7.

The report suggested that consumers had a bit of a split personality when it came to their feelings about the economy.

On the one hand, consumers expressed angst about the future. On the other, they felt better about the current economic situation.

A measure tracking consumers' sentiments on current conditions rose to 113.2 in May, up from 99 in April. Economists attributed this pickup to a mostly healthy - albeit slowing - jobs market and the recent string of record-high closings logged on Wall Street.

"People are hanging in there. There's a sense like things are OK for now but there seems to be a gnawing feeling - can it last?" said Stuart Hoffman, chief economist at PNC Financial Services Group.

"People are a bit wary of how long either the economy or their own personal finances can hold up in the face of higher gasoline prices and a weaker housing market. But so far, it is more of a fear factor than a reality show," Hoffman added.

The fresh reading on consumer confidence came as President George W. Bush continues to shoulder a low job-approval rating of 35 percent from the American public, according to a separate AP-Ipsos poll. On the economy, 41 percent approve of the president's economic stewardship, while 56 percent disapprove, the poll shows.

Economic growth slowed to a near crawl of a 1.3 percent pace in the January-to-March quarter, the weakest showing in four years. The main culprit: the housing slump, which caused some businesses to cut back on their spending. Consumers, however, showed resilience and managed to keep on spending, preventing the economy from losing even more speed.

Analysts wonder how much of an appetite consumers will have in the face of surging gasoline prices.

A fresh answer came Friday when the government reported that retail sales dropped 0.2 percent in April, a much weaker showing than economists were forecasting.

One day earlier, big retailers also reported disappointing sales for April. The reports cast a dimmer light on the outlook for consumer spending in the months ahead. The weaker sales were blamed on shoppers having to shell out more to fill up their gas tanks, leaving them less to spend on other things.

Gasoline prices climbed to $3.05 a gallon (80 cents a liter) nationwide in early May, from $2.97 in late April, the Energy Department says.

The reason why consumers have been holding up to the painful housing slump and gyrating energy prices has been because the job market has been strong. There have been recent signs, though, that it is weakening a bit.

The government reported last week that the unemployment rate edged up to 4.5 percent as employers added just 88,000 new jobs during the month, the fewest in two and a half years. Growth in workers' paychecks also slowed.

Consumers' feelings about the job market clocked dipped a bit in May to 123.8 in May, which still was a strong showing. In April, the index stood at 126.4.

An index tracking people's attitudes about investing rose to 107.5 in May, from 92.3 in April. Analysts attributed the improvement to the recent string of record-high closings on Wall Street.

The overall confidence index is benchmarked to a reading of 100 on January 2002, when Ipsos started the survey.

The RBC consumer confidence index was based on responses from 1,000 adults surveyed Monday through Wednesday about their attitudes on personal finance and the economy. Results of the survey had a margin of sampling error of plus or minus 3 percentage points.