Internet telephone company Vonage Holdings Corp. lessened net loss to $72 million (53.23 million EUR) during the first quarter, a period dominated by a guilty verdict in a patent suit that threatened to prevent the company from signing up new customers. 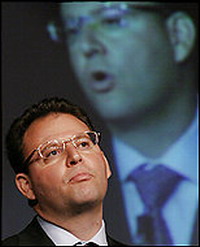 The subscriber base for Vonage's service, which connects phone calls over a high-speed Internet connection, grew by 166,000 customers to finish the quarter with nearly 2.4 million lines in service.

The pace of customers closing their accounts accelerated slightly to 2.4 percent of the subscriber base per month, up from 2.3 percent during the fourth quarter of 2006.

Regarding the patent suit by Verizon Communications Inc., which Vonage is appealing, the company said it has developed "workable designs" for two of the three technologies a jury found Vonage guilt of infringing. Vonage said it plans to begin deploying the workaround to customers shortly, but didn't offer specific timing.

"We have battled through an extremely difficult quarter and will continue the fight in the courtroom," Vonage Chairman and interim Chief Executive Jeffrey Citron said in the statement. "While the patent litigation has challenged our business, it has not distracted our focus on providing consumers with the opportunity to choose a better phone service."

Vonage's shares rose 22 cents to $3.27 in morning trading. The stock has plunged more than 80 percent since the initial public offering nearly a year ago, wiping out more than $2 billion (1.48 billion EUR) in investor wealth.