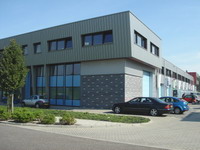 The deal to sell LaSalle Bank is in conjunction with a separate transaction in which Britain's Barclays PLC would buy ABN for more than $80 billion (58.8 billion EUR), the Wall Street Journal reported Sunday on its Web site, citing unnamed people familiar with the transaction.

The boards of ABN and Barclays were meeting Sunday to finalize their deal, and an announcement could be made as early as Monday morning, although the situation remained fluid, the newspaper reported.

Buying LaSalle would help Bank of America fill in a gap in its U.S. operations. Bank of America, the nation's second-largest bank by assets, operates more than 5,700 branches coast to coast but hasn't expanded significantly in the Midwest.

The move to sell LaSalle to Bank of America could prove to be a roadblock to a trio of banks that had sought to compete with Barclays' effort to acquire ABN.

Royal Bank of Scotland PLC, Spain's Banco Santander Central Hispano SA and Belgian-Dutch bank Fortis NV wanted to enter talks aimed at splitting up ABN and selling off parts of its operations to each - a solution that would likely be more lucrative for ABN shareholders, but which the bank's management has resisted.

ABN said Tuesday that it would meet with the three companies in Amsterdam early this week.

Barclays and ABN confirmed last month that they were discussing a merger, and last week they extended exclusive merger talks through April 20.