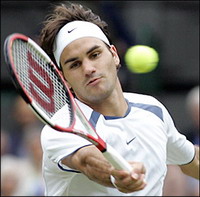 Roger Federer eased past Lee Hyung-taik 6-4, 6-3 Thursday in the third round of the Monte Carlo Masters.

Federer, who has reached the quarterfinals at Monte Carlo three straight times, set up match point with a serve-and-volley winner and then earned the victory when Lee hit a powerful backhand long.

Lee broke the top-ranked Swiss star in the third game of the first set, but Federer broke back in the fourth and took control after that.

Federer, a 10-time Grand Slam champion, lost last year to Rafael Nadal in the final at both the Monte Carlo Masters and the French Open - the only major Federer has not won.

Federer next plays 12th-seeded David Ferrer of Spain, who has never won a set against Federer in five losses.

The 10th-seeded Czech, whose previous best at Monte Carlo was reaching the second round, will face Robin Soderling in Friday's quarterfinals. The Swede beat Max Mirnyi of Belarus 7-6 (5), 6-2.

Later Thursday, Nadal was trying to extend his winning streak on clay to 64 matches when he faced Kristof Vliegen of Belgium.