Two men hijacked a helicopter and forced the pilot to land in a prison courtyard where they picked up a French prisoner in a dramatic jailbreak. 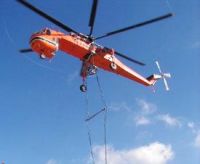 The accomplices paid for a helicopter ride at an airstrip near the eastern city of Sint-Truiden saying they were tourists from Marseilles in southern France, pilot Eric Mathieu told the RTL-TVI network.

After takeoff, they produced a pistol and hand grenade, ordering Mathieu to fly to Lantin prison outside nearby Liege.

"They pointed a revolver at my forehead," Mathieu told RTBF television. "The prison yard was so small, at first I refused to land there, but they threatened to kill me, so I had to do it."

Mathieu said he touched down while about 200 prisoners were exercising in the yard. One climbed on board while his accomplices threw tear gas canisters into the crowd.

The helicopter then landed less than a kilometer (half a mile) from the prison, where the prisoner and his accomplices drove away in waiting car.

RTL-TVI identified the fugitive as Frenchman Eric Ferdinand, who was in pretrial detention on charges of fraud and theft. RTBF said he had previously escaped from prisons in France and Spain.