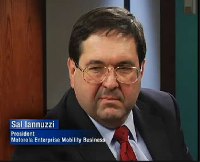 The company said Pastore's exit was by mutual agreement and that he will stay on through June to help with the transition process. Pastore is 59.

Iannuzzi, 53, previously served as president and CEO of Symbol Technologies, which was acquired by Motorola Inc. in January. Pastore became chief executive of Monster in October after serving as chief operating officer since 2002.

Monster filed restated financial statements in December to include charges related to an investigation into its stock-option granting. The company found it overstated its profit by $271.9 million between 1997 and 2005.

The company said it will record a second-quarter charge related to Pastore's employment agreement.

Shares of Monster Worldwide fell 17 cents to $40.15 on the Nasdaq Stock Market.