the U.S. government rates disabilities of members of the armed services inconsistently

The U.S. government rates disabilities of members of the armed services is inconsistently, and the Army might be shortchanging injured soldiers. 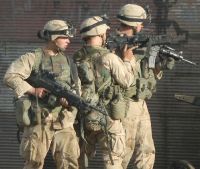 the U.S. government rates disabilities of members of the armed services inconsistently

"It is apparent that service members are not well served," Scott said in testimony prepared for delivery to an unusual joint hearing of the Senate Armed Services and Veterans Affairs committees called to examine gaps in the system.

In a preliminary review of Pentagon and VA data, the commission found the Army was much more likely than the other active forces to assign a disability rating of less than 30 percent, the typical cutoff to determine whether a person can get lifetime retirement payments and health care.

VA ratings tended to be higher, due to a separate system the department used that gave consideration to whether injured veterans were afflicted with multiple disabilities not just a predominant one.

While the differing standards account for some inconsistencies, "it is also apparent that DOD has strong incentive to assign ratings less than 30 percent so that only separation pay is required," Scott said in testimony. His commission was formed in 2004 to study ways to improve the benefits system and is scheduled to issue a report later this year.

Scott also faulted the failure of the Pentagon and VA to work more effectively to create a shared electronic system for health records. He said his commission had repeatedly gotten vague, misleading or outright inaccurate explanations from the departments.

The Senate hearing is the latest to examine troop care after disclosures in February of shoddy conditions and outpatient treatment at Walter Reed Army Medical Center in Washington, one of the premier facilities for treating injured service members from Iraq and Afghanistan.