Macedonia will repay US$137 million (EUR102 million) of its foreign debt earlier than planned. 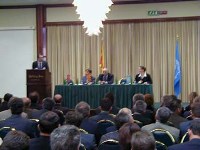 The repayment covers 20 percent of the country's debts to the World Bank and 6 percent of what it owes the European Investment Bank, said Prime Minister Nikola Gruevski. The money will come from its growing foreign exchange reserves.

"This move shows that Macedonia runs good, safe and stable economic policies, and the early repayment of foreign debts reconfirms the success of the government's economic program," Gruevski said. "This will classify Macedonia as a low-debt country."

The early repayment will save the budget more than US$37 million in interest payments that would have been due under the initial 2021 repayment schedule, said government spokesman Ivica Bocevski.

The savings will go toward development projects, Gruevski said.

Gruevski said other early debt repayments, to the International Monetary Fund and other institutions and governments, would follow.