Head of the International Monetary Fund:"Threats to the global economy have lessened a bit"

Threats to the global economy have lessened a bit in recent months, but policymakers must remain on guard nonetheless. 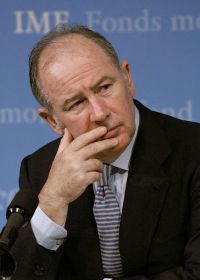 Head of the International Monetary Fund:"Threats to the global economy have lessened a bit"

The remarks by IMF chief Rodrigo de Rato come as investors have fretted about the severity of the housing slump in the United States and its impact on the rest of the world.

"Where is the global economy now? I do not think that the risks are greater than they were six months ago. Actually, I think they are a little lower," de Rato said in a speech to the Peterson Institute of International Economics.

Last week, an IMF report concluded that so far the economic slowdown in the United States the world's largest economy and biggest importer  has had only a small effect on global economic activity.

Even so, de Rato said global economic policymakers must remain vigilant to potential dangers and not be lulled into a false sense of security.

"Central banks around the world have established credibility in taming inflation, and their task has been made easier over the last six months by lower oil prices," de Rato said. "But the risk that political events could disrupt the global economy remains."

Skewed global trade and investment patterns, a threat to the world's longer term economic stability, continue, he said. And, an increased willingness by some financial players to take risks "has produced some questionable lending and borrowing," de Rato said.

De Rato predicted last month that global growth for all of this year will clock in at close to 5 percent. De Rato said that would be the strongest five-year span for the world economy since the late 1960s.

Projections will be released this week ahead of the spring meetings of the IMF and the World Bank on April 14-15.

"Some of the risks are different, and there is greater consciousness of the uncertainties and paradoxes that lie behind our current prosperity," he said.

On another topic, the IMF chief said the lending institution is moving ahead on plans to revamp itself to better respond to global challenges and to ensure that member countries' voices are heard. "The changes we need won't be easy," he said.

The IMF also is working on a plan on how it can beef up its periodic economic reviews of countries, especially their exchange-rate practices. "Another part of the strategy is to improve our practice, for example, by deepening our analysis of exchange rates and of spillovers between countries and markets," de Rato explained.

That is of keen interest to the United States, which has been pressing China to let its currency go up in value. Critics contend China is keeping its currency artificially low, thus hurting U.S. exports and contributing to the loss of U.S. factory jobs. Besides the United States, other major industrialized countries as well as the IMF have said China needs to take more steps toward a flexible currency policy.

"I want to underline again the limits to what we can do," de Rato said. "The fund must persuade, it cannot dictate. The fund can advise, but we cannot and should not dictate to our members on the choice of their exchange-rate regimes, their intervention policies or their exchange rate levels."