Christopher Pittman who killed his grandparents finds a lot of supporters

Every week, Janet Sisk drives nearly 100 miles (160 kilometers) to spend her Sundays with a teenager who was 12 when he murdered his grandparents. 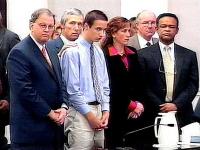 Christopher Pittman who killed his grandparents finds a lot of supporters

She planned to spend part of Easter weekend sitting across a table from Christopher Pittman at his maximum security prison in Columbia. She also made the trek from her home in Charlotte, North Carolina, to spend Christmas Eve with him.

She is not alone a half-dozen people drawn to Pittman's case visit him weekly. Another woman has flown from Michigan to see him twice in the past year. Hundreds of others rally around him in other ways: promising to pay for college when he gets out of prison, and campaigning for extra safeguards for arrested juveniles in South Carolina.

To Sisk, director of the Juvenile Justice Foundation, Pittman has become more than the youth who attracted worldwide attention when he blamed the 2001 slayings on Zoloft, the antidepressant he was taking. She now thinks of him as her third son.

"He's shy and he's quiet and he's polite," Sisk said recently. "It's like we've been friends with him forever."

Pittman used a pump-action shotgun to shoot his grandparents, Joe and Joy Pittman, and then set fire to their Chester County home.

During his trial, not held until four years later, Pittman's attorneys unsuccessfully argued the slayings were influenced by Zoloft. A judge sentenced him to 30 years in prison.

Pittman turns 18 on Monday in an adult prison where he was moved six months ago from a juvenile facility, but the supporters who visit him say that even Pittman does not consider himself to be grown up.

"Chris said, 'You have to remember, that everyone here is the age that they were when they went in,"' said Teresa Strattard, the Saginaw, Michigan, woman who has visited twice. "So, he was basically saying that he was 12."

The South Carolina Department of Corrections does not allow media to interview inmates in person.

Like Sisk, Strattard has a son of her own, and the boy she saw on television during his trial struck a chord that seems to still reverberate for Pittman's advocates.

"When I saw him sitting in that courtroom, I realized that could be my child or anyone's child," Strattard said. "There was just something about him, and it shocked me, and it wouldn't go away."

Those sentiments, combined with outrage that Pittman was held so long before his trial, have fueled supporters who hope that an appeal of the case to the state Supreme Court will succeed. In October, dozens of supporters and relatives gathered in Columbia as defense attorney Andy Vickery argued that his client's confession was influenced by Zoloft and his youth.

Lawyers say a decision on the appeal could come at any time.

"I've got my fingers crossed, and I'm hoping," said Pittman's father, Joe Pittman, who has traveled from Florida several times to visit the son who killed his own parents. "He's on my mind every day."

Christopher Pittman's mother has not been part of his life for years.

Through his office, prosecutor Barney Giese declined to comment on the case because the appeal is pending. During the trial, he reminded jurors of the brutality of the murders, describing how Pittman shot his grandfather in the mouth and his grandmother in the head and then told police they "deserved it."

Pittman supporters recently asked lawmakers to pass a measure requiring increased protections for juveniles taken into police custody in South Carolina. The measure does not appear to be gaining traction.

While he waits for a decision on the appeal, Pittman has a job on the prison maintenance crew. His supporters say he spends his time staying busy with that work, and with staying safe.

"I believe his grandparents would want us to give our love and compassion to their grandson and to fight for his freedom," Sisk said. "Those that really knew Joe and Joy Pittman and their kindness and love they had for their grandchildren, I'm sure, would agree."