Airbus has taken advantage of decades of European subsidies worth the equivalent of over US$100 billion to capture long-standing Boeing customers and become the world's largest seller of planes, U.S. officials told a WTO investigative panel. 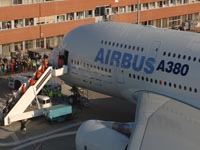 The strategy will continue to hurt the American plane manufacturer unless the World Trade Organization takes action, the United States said in opening its case against claims of illegal EU support for the Toulouse, France-based manufacturer of jetliners.

The European Union rejected the claims and said the U.S. has failed to show how Airbus financing has led to lost sales or lowered prices. The sides released their prepared statements late Tuesday and on Wednesday.

Launch aid - long-term loans granted by European governments at below-market rates - "has enabled Airbus to launch a series of large civil aircraft models at a scale and a pace that would have been impossible without subsidies," the U.S. said in the confidential hearing Tuesday.

"Launch aid has enabled Airbus to pursue an aggressive strategy to increase its market share, likewise in a way that would be impossible without subsidies," it said.

According to international trade rules, government support in manufacturing is illegal if another WTO member can prove that the subsidy has harmed one of its companies or industries.

The U.S. accuses Airbus of receiving US$15 billion (EUR11.3 billion) in launch aid from the 27-nation European Union and its member states, which would have amounted to costs of "well over" US$100 billion (EUR75 billion) if the loans were given at commercial rates, according to a 72-page prepared statement it read out.

It argues that the money is legal because it is repaid as Airbus sells aircraft. But EU officials acknowledge that if sales of new planes, such as the troubled A380 superjumbo, fail to meet forecasts - as is possible given production setbacks - there could be a subsidy shortfall and a net gain for the company.

"If Airbus fails to sell enough of the aircraft to repay the loan, the outstanding balances are indefinitely extended or forgiven," the U.S. argued at the hearing, which focused only on the United States' claim of illegal European payments.

The EU will file its own allegations against U.S. state and federal payments to Boeing this week at the WTO. The bloc accuses the U.S. of covering up "unprecedented" subsidies in the state of Washington for the 787 and other Boeing commercial aircraft, and take issue with the research funding the company gets from the U.S. government, a figure 10 times higher than what the EU says Airbus receives.

In its response to the U.S. claims, the EU said it was a mistake to assume that any competition from Airbus is a result of subsidies. The bloc said the U.S. has erred by ignoring shocks to the industry such as the Sept. 11 terrorist attacks and the SARS flu epidemic in Asia.

"The United States offers a faulty economic analysis predicated on the assumption that but for (EU) subsidies, Boeing would have a monopoly in all large civil aircraft markets," it said.

Officials in Brussels also say the U.S. arguments are undermined by Boeing's good health and bright future. Airbus sold more planes than Boeing last year, but fell behind the Chicago-based company on orders for the first time in six years and has suffered from a series of production setbacks and leadership crises.

Boeing's greatest concern is how Europe plans to fund the Airbus A350 - a mid-sized jet aimed at competing with Boeing's 787 Dreamliner. Airbus CEO Louis Gallois has refused to rule out state guarantees or refundable launch aid from governments.

"What 2006 shows is how the absence of a subsidized and aggressively marketed new Airbus aircraft improves the fortunes of the U.S. large civil aircraft industry," the U.S. said. "The year 2006 was the first year in a decade or more in which Boeing did not have to counter an aggressive effort by Airbus to market a recently launched and heavily subsidized plane."

But, the U.S. added, subsidies will allow Airbus to quickly bounce back and again harm Boeing's interests in a manner that violates international trade rules.

"Airbus will overcome the technical problems with A380 production, and the A350 with fully revised technical specifications will be back in the market in the very near future," it said. "If launch aid is permitted to continue, the adverse effects seen in recent years will continue as well."

The WTO is due to issue its final report on the U.S. case against Airbus on Oct. 31 and the EU case against Boeing in April 2008, but the timetable may slip due to the complexity of the cases, reports AP.