Samsung Electronics Co. has unveiled a new mobile phone that features some of the sleek design and functions of Apple Inc.'s much-hyped iPhone. 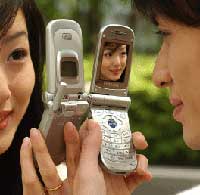 The ultra-thin iPhone is controlled by a large touch screen, plays music, surfs the Internet, and runs the Mac OS-X operating system, among other functions.

Samsung said the Ultra Smart F700 also has a full touch screen as well as a traditional QWERTY key pad that slides out "for users who are not yet familiar with a touch-screen-only user interface."

Its third-generation (3G) technology is considerably faster than the iPhone's EDGE system, and its 5-megapixel camera outclasses the iPhone's 2-megapixels.

"The Ultra Smart F700 is a good example of how (the) mobile phone will evolve in the future," Choi Gee-sung, president of Samsung's Telecommunications Network Business, said in a statement Thursday.

Apple's iPhone is set for U.S. release in June and will cost US$599 (EUR460) for the high-end model. It is to be introduced in other markets later this year and in 2008.

Kim, the Samsung spokeswoman, said marketing plans for the Ultra Smart F700 remain unclear because Samsung wants to see what kind of reaction it receives at the Barcelona show, reports AP.

The LG phone, produced in partnership with the Italian fashion brand, is to go on sale in late February for 600 euros (US$780) at mobile phone dealers and Prada stores in Britain, France, Germany and Italy. It is to be launched in Asia in March.